Does Eating Fat Make You Fat? 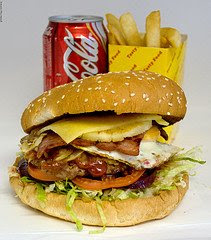 Since we’ve been talking about the subject of fat, I found myself wondering whether indulging in a huge hamburger dripping in fat makes you fatter. In other words, does eating fat make you fatter, since your body doesn’t have to convert fat into anything else? It’s already fat. Is a fatty hamburger really an example of:

“An instant on the lips, an eternity on the hips”?

Eating Fat Does Not Make You Fatter
It turns out that the answer is, “No.” Eating fat does not, by itself, make you fatter. At least, ingesting straight fat doesn’t make you any fatter than ingesting any other kind of food that has a lot of calories.

What makes us fat is eating more calories than we burn, whether those calories come in the form of fat or carbohydrates. Actually, studies have shown that decreasing fat intake actually increases how fat we are. All of this, of course, makes a mockery of the “fat-blocking” diet pill industry, which is flourishing.

Some Shocking Facts About Fat
Studies show that low-fat diets don’t actually work. In fact, people who went on low-fat diets do lose weight — about two to four pounds — but they end up gaining that weight back, even while they are still on the low-fat diet. Now that’s a bummer.

Get this: in the U.S. the average person’s fat intake has been reduced, over time, from about 40% of our total calorie intake to about 33%. At the same time, as a nation we’ve gotten fatter. We’ve seen a gradual increase in the average weight of the U.S. citizen, and a huge jump in the number of cases of obesity. Yikes!

Finally, the “war on fat” has been a losing proposition in more ways than that. Not only are we fatter, as a nation, but we are also seeing an increase in diabetes, heart disease, and cancer. Two-thirds of all Americans are overweight, and 30% of the adults in this country are obese.

Don’t Eat Less Fat, Eat the Right Fats
So much for the idea that eating less fat will make us less fat. Apparently, that’s not going to happen, as the statistics amply prove. Instead, the key is to eat the right kinds of fat while decreasing our net caloric consumption. Basically, the Golden Rule of eating the right kinds of fat is this:

This isn’t hard to do. Stop eating doughnuts and French fries, and start cooking with olive oil and eating wholes grains and nuts. Better yet, start eating blue-green algae, which contains some of the highest levels of omega-3 and omega-6, the polyunsaturated fats that are good for you — and which your body cannot make by itself. Best of all, blue-green algae comes in a capsule so you don’t even have to know how to cook to take it. Pop some pills and you are good to go. It’s the perfect solution for those who want to eat healthy but either can’t or don’t like to cook foods with the right kinds of fat!

If you enjoyed this post, please consider leaving a comment or subscribing to the feed to have future articles delivered to your feed reader.

Staying Warm in the Cold

With the chilly wind blowing in this season, you may be looking for ways to stay warm. While you may have the luxury of having

Save your Skin Barrier

With the season’s changing and frigid winds blowing on your face, you may find your skin barrier to be damaged. Now you might ask, “what