Filling the Gaps in a Modern Diet – Solving Nutrition Problems 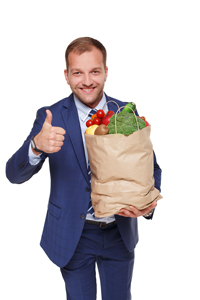 This may sound a bit silly coming from a nutritional counselor and doctor of Chinese Medicine, but I no longer try to “eat right” all the time to get all my nutrition. Eating right no longer does the trick in our modern diet, so I have to resort to other means.

Having examined the content of the food we buy at the grocery store, I’ve realized that there are no longer enough vitamins, minerals, and trace minerals in the food the keep my body happy. Even the best “organic” produce doesn’t have enough “goodies” to satisfy my nutritional needs. This leads to some serious nutrition problems.

Nutrition Problems: What’s Wrong with Our Food?
The short answer to that question is that we, as a population, are producing more food with less soil, and the soil is getting poorer with each passing year. As you’ve probably already figured out, the food we grow gets most of its nutrition from the soil. Of course, you need sunlight and water, too, but the soil is the source of much of the vitamin, mineral, and trace mineral content in our food. Today, farmers don’t allow fields to lie fallow much, and don’t re-mineralize the soil, and as a result we have food that looks the same (or even better) than it did 50 years ago, but has some serious nutrition problems.

For instance, according to the Kushi Institute of Becket, Massachusetts, the vitamin and mineral content in our fresh vegetables have declined a lot. They studied USDA nutrient data that covers the years from 1975 to 1997. According to their study, average calcium levels in 12 fresh vegetables have declined 27 percent, iron levels have dropped 37 percent, vitamin A levels, 21 percent; and vitamin C levels, 30 percent. In other words, Popeye wouldn’t get nearly the same bang for his buck out of a can of today’s spinach as he would from a can of spinach of the 1975 vintage.

Now carry that same nutrition gap up the food chain. If you’re not a vegetarian, then not only are you eating nutrient-poor vegetables, but the source of your meat is also becoming nutrient-poor. Cows, pigs, lambs, and other animals are being fed lower-quality grass, hay, and other vegetative matter (I won’t get into the whole debate about livestock feed because it is way too complicated). Suffice to say that the nutritional content of all of our foods (unless we grow it ourselves) is getting lousier by the year, resulting in nutrition problems that many of us aren’t even aware of.

What to Do About Nutrition Problems in the Modern Diet
I live on a micro-farm so I can grow some of my own food. We grow some fresh vegetables for ourselves, and we grow most of our own hay for our horses. We fertilize with natural substances (manure, emulsified fish “goo,” and volcanic rock dust mixed with blue-green algae) as much as possible.

But this doesn’t cover our food for the whole year. So like most other people, we have to shop for food in our local stores. Knowing what I know about the nutritional content of the food I’m buying, I don’t worry so much about buying the right stuff there. Instead, I focus on creating a foundation with supplements that I know circumvent the nutrition problems created by food I buy at the grocery store.

On a daily basis I consume:

1. High-Quality Probiotics and Enzymes: acidophilus, bifidus, and enzymes fortified with mycopepsin and cayenne

2. Blue-Green Algae: never heated above 105 degrees and freeze dried at the source in Klamath Lake, both with and without the cell wall

With these three categories of supplements, I know I’ve got all the nutritional bases covered. That doesn’t mean I live on jelly doughnuts and Cheetos, but it does mean that I don’t worry so much about whether I buy this brand of carrots or that brand. The same goes for our dogs and cats. We buy the best available natural food possible for them, and then fill in the nutritional gaps with some of the items I’ve listed above. The horses get the same treatment: my wife views hay as horse entertainment, not as total nutrition.

The really neat thing is that it doesn’t take much to solve these nutrition problems. The list above may seem like a lot, but it’s not. It’s a few capsules in the morning and a few at night. The horses, dogs, and cat get even less because they don’t live with as much stress as humans do, so they need even less help. The cost of these supplements isn’t huge, and the fact that I get to skip worrying about what I’m eating is totally priceless!

Staying Warm in the Cold

With the chilly wind blowing in this season, you may be looking for ways to stay warm. While you may have the luxury of having

Save your Skin Barrier

With the season’s changing and frigid winds blowing on your face, you may find your skin barrier to be damaged. Now you might ask, “what